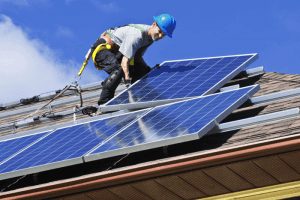 Self consumption defines a producer (self-producer) that partially or completely consumes energy electric energy produced by his own installation.

It represents a real advantage as it maximises energy consumption locally produced.
Through this system, it is easier to reduce energy bill and get a return on investment.
Adding a battery considerably improves its efficiency. This system storages the energy produced during the day (…). See the article (only in French)

PowerTech Systems offers an advanced energy storage system with lithium ion technology. It entirely prevents from explosion or fire risks (…). See the article (only in French)

The solar panels do not work at night and badly with bad weather. Also, wind turbines depend on wind conditions. Generators depend on the supply of gasoline.

The energy generated at a certain time of the day must be stored to optimise domestic use, without disrupting supply and with permanent control of the remaining energy reserve.
The batteries required for energy storage must be durable, reliable, environmentally friendly, and must be able to supply energy for long periods of time without being powered by the grid.

The Self-consumption market in France